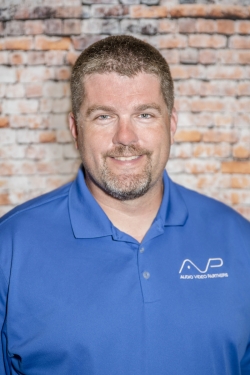 Born in Orlando and raised in Bradenton, Luke Anderson is a Florida native who attended Eastern Kentucky University on football and academic scholarships and graduated with a Bachelor of Science in Business Management.

After a brief period working in the nonprofit sector in Atlanta, GA, Luke decided to pursue is his passion for audiovisual technology and joined Atlanta-based Synergy Multimedia in 2003. Luke was a key component in Synergy’s Florida expansion and handled daily sales and business operations.  As the industry and financial landscape changed in 2005 Luke and his then partner sold the business to a local competitor where he stayed on in various sales and operations roles for several years.

Having learned the industry and developed a taste for entrepreneurship, Luke started Anderson AV in 2009 with a primary focus on the residential market. After building his business on a combination of local, national and international installations, Luke saw an opportunity to grow the commercial side of the business.  In 2015 he and the owner of ELS (Kevin Tippen) merged operations and are now a single entity – Audio Video Partners.

In his spare time Luke enjoys traveling with his family, being part of his son’s sports and playing tennis. He lives in Lakewood Ranch with his wife, Laura, and their son, Chad.

Another Florida native, Kevin Tippen was a military kid born in North Florida on Eglin Air Force Base and moved around with his family during his formative years. After receiving his Captain’s License from Merchant Marine School, Kevin spent two decades working on oilrigs and skippering private yachts ranging in length form 48 to 90 feet.

Kevin met his wife while working as a yacht broker for Intrepid Powerboats and decided it was time to settle down. He joined a local security company where he learned the business and after four years transitioned to a AV company where he worked for two more years.

In 2011 Kevin started ELS with a primary focus on commercial services. Having worked together with Luke for a previous employer, ELS and Anderson AV were friendly competitors providing complementary services. Merging their businesses in 2015 was a strategic move that positioned AVP for significant growth.

Kevin enjoys flying RC airplanes, restoring vintage motorbikes, and is a crew member for a private NASCAR racing team (in his spare time). He lives in Sarasota with his wife, Debbie, and they have two children, Brittany and Joseph.

Request a quote or consultation today